When you think of explosive elements, substances such as TNT and dynamite likely come to mind. However, many materials that seem completely harmless actually have explosive qualities due to combustible dust.

Combustible dust is a fine material with the potential to explode when suspended in the air. Even if the materials aren’t usually combustible, they can still burn or explode if the particles are in the right concentration and size. So, you should assess any activity that creates dust for explosion risks.

In this guide, Extraction Solutions has broken down some of the most unexpected explosive materials, the industries most affected by them, and how to minimise the hazards. 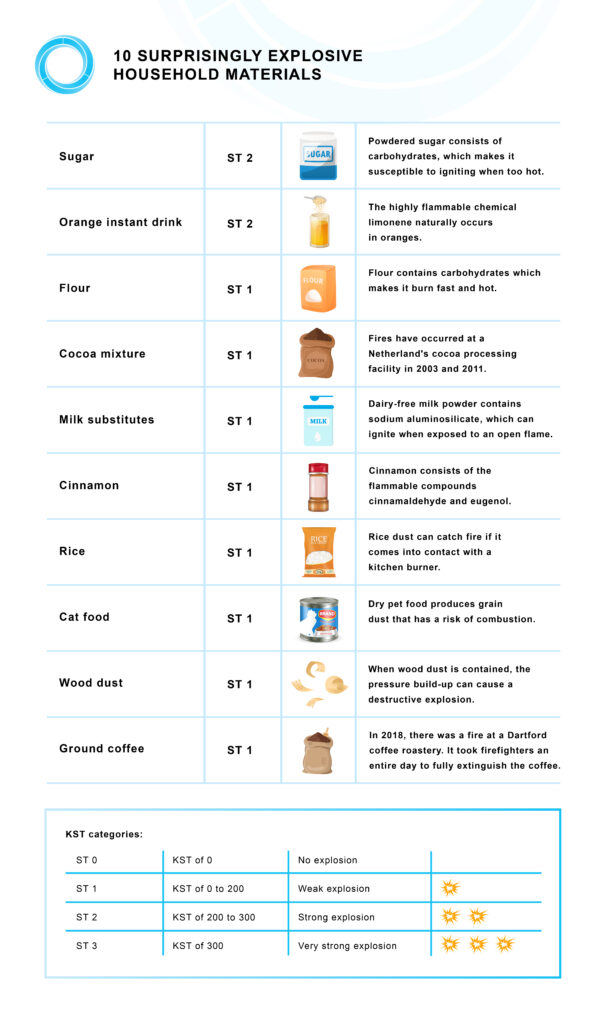 How is the explosiveness of dust measured?

The KST, the deflagration index of dust, is used to estimate a dust’s explosive power compared to other types of dust.

The KST categories are as follows:

Most dust types used in everyday situations have a KST rating of ST 1 or ST 2 varying between a weak and strong explosion risk. 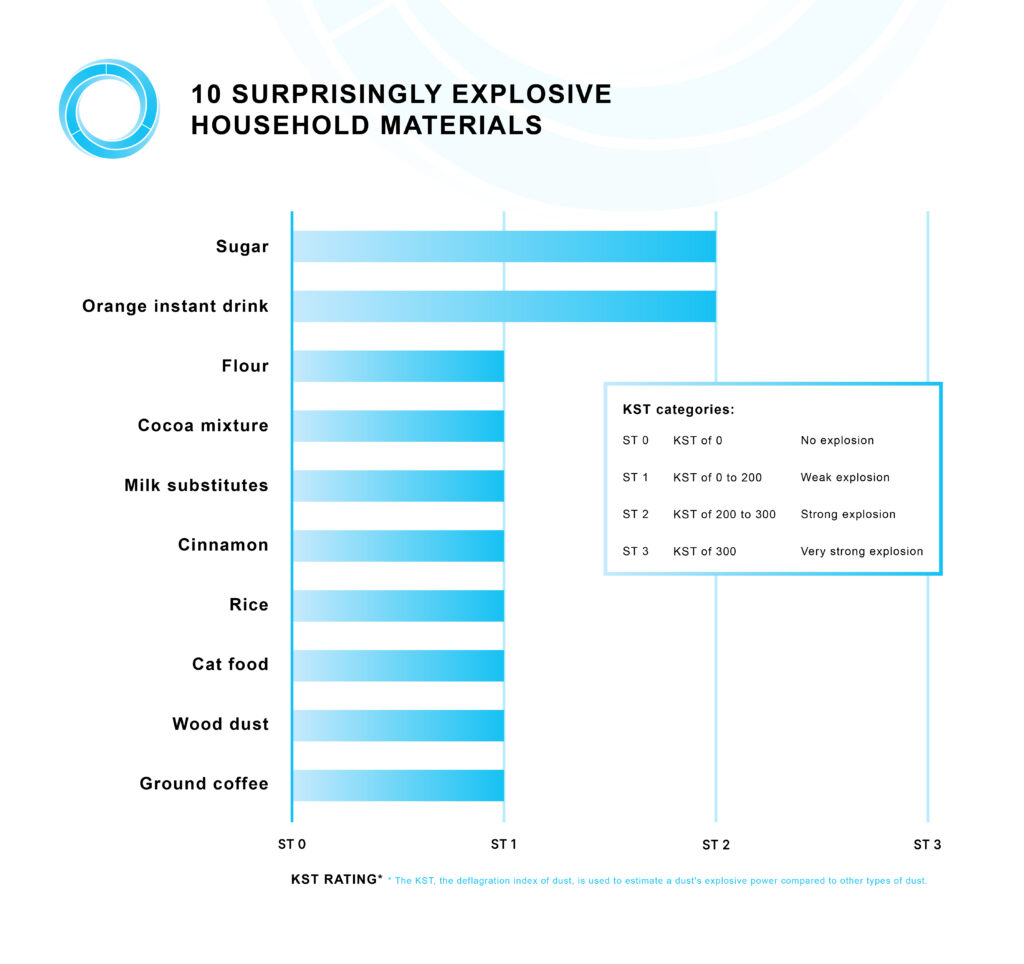 Before implementing safety measures, you’ll need to know which non-suspecting materials are explosive.

Flour contains carbohydrates which makes it burn fast and hot. It’s unlikely for household kitchens to store enough airborne flour to create a fire hazard, but the risk is far greater in flour mills.

In October 2021, a fire took place in a Corby flour mill complex, which reportedly involved machinery from the first floor of the building and a chute from the second floor to ground level. The fire was believed to be accidental and fire crews gave advice to the building’s staff members.

In 2011, an explosion occurred at a cocoa processing facility in the Netherlands that fire services extinguished after a few hours. However, another fire that took place at the same plant in 2003 burned for several days after spreading to the stored cocoa.

Dairy-free milk powder contains sodium aluminosilicate, which is an anti-caking agent and can ignite when exposed to an open flame.

Like flour, powdered sugar consists of carbohydrates, making it susceptible to igniting when too hot. However, this household item burns more intensely than flour.

At the beginning of 2021, a fire broke out in the drying area of the Bury St Edmunds British Sugar factory, causing a huge emergency services response. According to reports, 15 fire crews tackled the blaze, and no injuries were caused.

Cinnamon consists of the flammable compounds cinnamaldehyde and eugenol and can ignite when too much is released into the air.

Rice dust, which accumulates on dry rice, can catch fire if it comes into contact with a kitchen burner. A large quantity of rice is required for there to be enough dust to sustain a fire, which is a risk in a rice warehouse.

When wood dust is contained, the pressure build-up can cause a destructive explosion.

The severity of an explosion depends on various factors, including the moisture content, the size of the ignition source, and the enclosure’s strength.

In 2018, there was a fire at a Dartford coffee roastery which thankfully didn’t result in any injuries. The cause wasn’t determined, but it was contained in the warehouse and believed to have destroyed 200 tonnes of coffee.

It reportedly took firefighters an entire day to fully extinguish the coffee, which entailed turning it over and then dampening it. 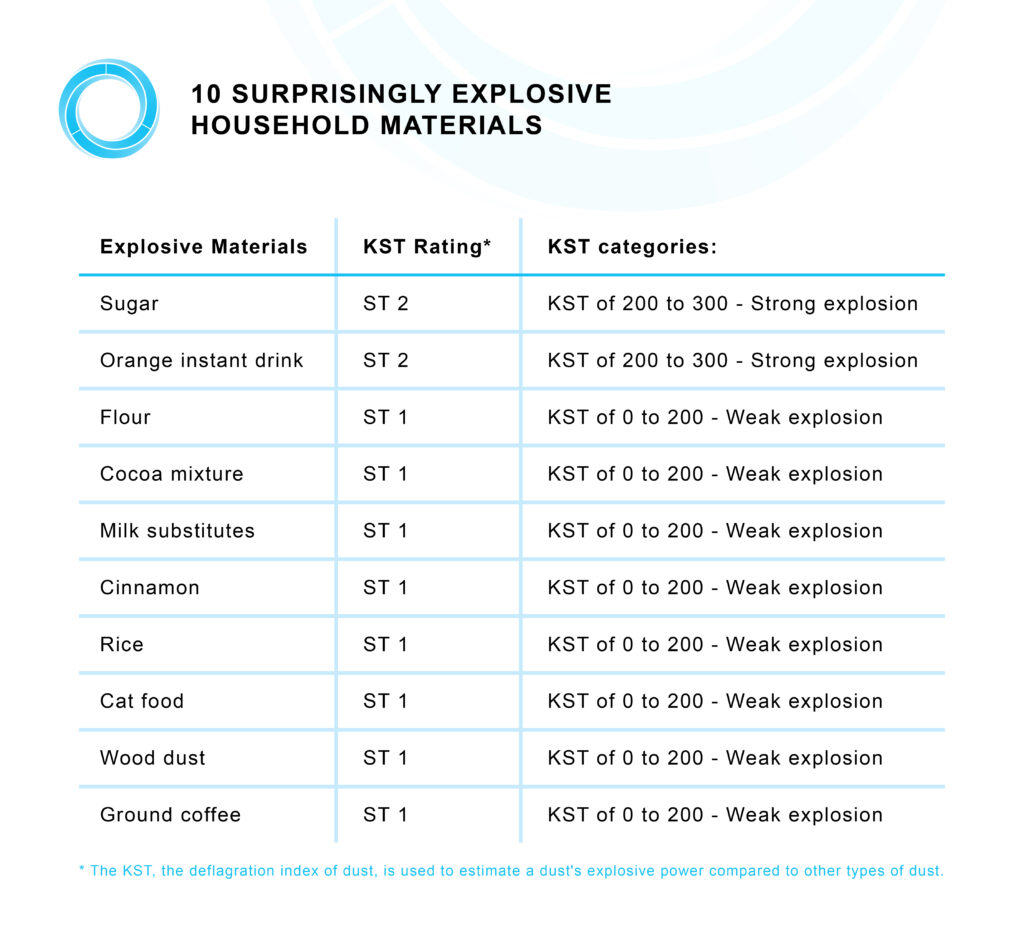 There are three elements needed to spark a fire, known as the ‘fire triangle’, which consists of:

However, there are two additional factors needed to cause a dust explosion, which entails:

– The dispersion of dust particles in the right concentration.
– The confinement of the dust cloud, which enables a build-up of pressure

These five factors are known as the ‘dust pentagon’.

Which industries are at risk of explosive dust?

The types of businesses most exposed to these unexpected combustible dust include, but aren’t limited to:

How to minimise the risk of dust explosions

To protect your business and employees from dust explosions, assess the KST of the materials used within the facility, and implement the appropriate safety measures.

David Night, Spokesperson for Extraction Solutions, said: “In domestic settings, there is a small risk present from these materials. Avoid activities that push a lot of particles into the air, like kneading dough or mixing powdered ingredients next to an ignition source, such as a lit gas hob, candles, or other naked flames.

“If you spill ingredients such as flour or sugar, clean them using a wet mop or cloth, as moisture captures the particles, whereas dry methods for cleaning like brooms kick the particles up into the air. A domestic vacuum may seem like an easy option to clean a spillage, but fine particles can clog filters and cause the hoover to push particles back out into your home.

“Another positive to reducing airborne particles in the kitchen is a reduced risk of irritating your respiratory system. Research from last year shows that bakers and flour confectioners are at a higher risk than other professions of developing asthma.

“It’s worth noting, however, that most of these explosive materials aren’t usually seen in a high enough concentration in domestic settings to pose a threat.

“Businesses such as warehouses and factories face more risk of an explosion due to the quantities of material and dust involved.

“Underestimating the danger of combustible dust can lead to disastrous fires that put the safety of staff members at risk.

“If an explosion destroys the products or facilities, the business will face a huge drop in productivity due to the time required to rebuild machinery. Fines, settlement payments or jail time could also be a risk, depending on the safety breaches and liability.

“Identifying the risks of the material will help you develop a suitable strategy for removing the hazards.”

Do you need to equip your facility with a dust extraction system?

Extraction Solutions design, supply, install and maintain all aspects of dust extraction systems for companies across the UK.

If you have any queries regarding dust extraction, get in touch with the Extraction Solutions team to discover how to protect your business and staff from combustible dust.